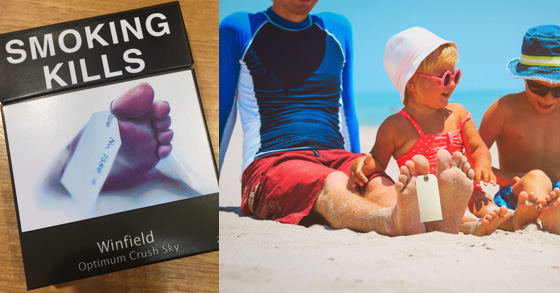 Questions over the authenticity of a photo used by the government to warn of the ill effects of smoking have been raised after an unedited version of the image was leaked.

The unedited image shows a healthy man enjoying a lovely day at the beach with someone else’s children, rather than lying in a morgue dead, as seen in the heavily edited version used on cigarette warning labels.

A government health spokesperson has called for calm, assuring the public that the man had been killed as soon as the photo shoot on the beach was finished and that “no duplicity has taken place”.

“The man who appeared in the image told us he smoked a cigarette back in the ’80s and twice in the ’90s,” the spokesperson said. “And since we choose him to star in the campaign for this reason, and we killed him afterwards to ensure the authenticity of our warning label, we can technically say he died because of smoking.”