There’s still plenty to do in Sydney to make the most of your holidays:

3. Drink alcohol at the pub.

5. Drink alcohol on a park bench.

8. Worry about going back to work.

Now get out there and enjoy! 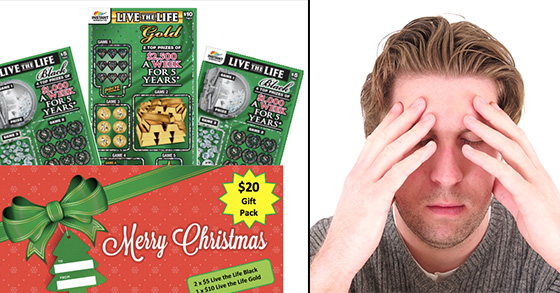 A Sydney man who thoughtlessly stuffed a few scratchies into a birthday card to give to a distant relative during Christmas lunch is now really hoping the recipient doesn’t win anything more than $2.

“I’d be fucking spewing if he wins anything good,” the man said. “To think all that cash could’ve been mine, but I gave it away to some bloke I don’t even like. I’m feeling a blood clot forming in my brain from all the worry.”

The man is not alone in feeling the stress of seeing someone he barely cares about win big off a scratchie that could’ve been his.

“I had Christmas spoiled completely one year when my lazy Secret Santa gift resulted in a $10,000 win for the giftee,” one woman said. “And to make things worse, the winner was willing to share, but I simply couldn’t break the sacred bond of secrecy that makes Secret Santa the great tradition it is.”

Winfield has described its new Optimum Ice Crush darts as “smokes for a new generation” at a product launch today.

The durry features the similar NASA-developed technology as the brand’s Optimum Crush product, which contains a crushable mint pellet that releases a menthol-like taste from first to last drag.

A spokesperson said evolving the popular line was a no-brainer.

“Kids already love the icy-freshness of Optimum Crush, so adding a more exciting type of ice with Optimum Ice Crush was a logical next step,” he said, adding that it’s “perfect for those wanting to take the edge off and on at the same time”.

“As a gentleman who enjoys both a ciggie and a shard, this superhero team-up works as well as Batman and Superman,” one 14-year-old said.

Optimum Ice Crush will be sold in packs of one and are said to provide days of enjoyment.

A Sydney man enjoying a purple patch on the sentimental favourite pokie he grew up with, Spring Carnival, decided to call it quits and cash out at $290 so his spectating pals didn’t enforce the compulsory rule of shouting everyone a nose bag if your winnings exceed $300.

The man said hitting collect was one of the hardest things he’s ever had to do, as he was certain things were far from finished on the race track.

“Winning more than $300 when your mates are watching is basically a loss,” the man said. “So instead of shouting a bag, I grabbed everyone a schooner of rum or two, then snuck off to look for the only sort of bags I’m interested in – the bookie bags belonging to W.Winbig.”

The man ended up returning all his winnings, credit card cash advances, and a Nimble loan to Spring Carnival. He will be not be seen for the rest of the weekend and will be taking his lunch to work every day next week.

Trying to prove himself smarter than everyone else, a local Sydney man can’t stop telling everyone he has only bet $2 on the Melbourne Cup this year “for a bit a harmless fun”.

No one is quite sure why the man is so proud of placing the kind of bet your nana used to put on for you when you were at school.

“This reverse humble brag technique he’s going for makes him simply unrelatable,” one man said. “Most Australians have taken out Nimble loans for this special day that are so substantial we’ll have to hit the road and live in Asia for a few years if we don’t win.”

People who have had to endure previous Melbourne Cup events with the man said he still gets very stressed out during the race.

“He’s sweats bullets during the race,” one man said. “But unlike the rest of us, he’s praying his horse doesn’t win, so he doesn’t feel like an idiot for only punting $2. It’s no way to live.”

The man is also telling everyone that he will only be drinking sparkling water to celebrate the day’s festivities and won’t have a party pie as he brought a salad in from home.

Moves that will be outlawed from today include hitting the spin button with the edge of your schooner glass, switching bet amounts to reset the odds, and tapping the screen three times with your finger before choosing a suit on a gamble.

“Most players do the right thing when competing, but there’re going to be cheats in every sport,” the chairman for the NSW Pokies Federation said. “Most people don’t know it, but we already have cameras inside pokies to track facial expressions that reveal emotions, so we’ll simply use the cameras to also catch people using performance enhancers like lighting a smoke before initiating a feature.”

Respectable pokie players are shocked and embarrassed that some players have brought shame and controversy to “the nation’s game”.

“I’ve always been proud to tell everyone how much I earned on the pokies, in fact, that’s sometimes all I talk about,” one player said. “But now I’m worried people will think I didn’t put the work in and just cheated.”

Those caught cheating will receive a harsh 15-minute exile in the main bar, with no access to the complimentary mini spring rolls with sweet chilli sauce.

Two major supermarkets today announced they will be ripping out self-service checkouts and replacing them with self-service TAB terminals, in a desperate bid to recover profits lost to rampant theft.

“Customers have been ripping us off for far too long. This is the perfect way to even the playing field and recuperate some of the profits we lost because of dirty, thieving organic vegetable lovers,” a supermarket spokesperson said.

“Our system told us sales of brown onions were through the roof, which led to the mass over-ordering and stockpiling of brown onions, which weren’t actually selling at all, and left us with huge shortages of organic produce, smoked salmon, lobsters and mangoes.”

If the self-service TAB terminals prove a hit, both supermarkets have vowed to stop selling food completely and fill all floor space with poker machines.